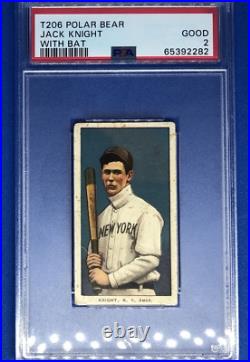 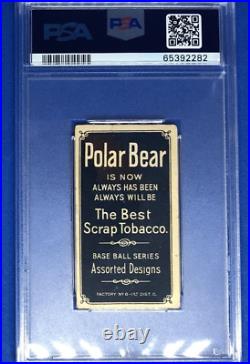 T206 Polar Bear - Jack Knight, with bat - New York Highlanders/Yankees - PSA 2 - Low Pop. One of his brothers became a doctor, a profession Jack believed was a higher calling than baseball. Knight was born in Philadelphia on October 6, 1885.

Knight's nickname "Schoolboy" came about as he was signed into professional baseball directly out of high school by Hall of Fame manager Connie Mack from the championship team of Central High School in Philadelphia. On the back and card : The Polar Bear back is considered a better back for T206 cards, a step above Piedmont and Sweet Caporal. Generally, around 5% of T206 cards in existence carry the Polar Bear advertising back. Good condition Polar Bear cards are less common than other backs as the cards were inserted in Polar Bear scrap tobacco. Cards became soiled in contact with the tobacco.

This PSA 2 graded card is a rarity and a nice addition to any T206 collection. Together with the 1933 Goudey set and the 1952 Topps set, the T206 completes the "Big Three" classic baseball card sets.

This item is in the category "Sports Mem, Cards & Fan Shop\Sports Trading Cards\Trading Card Singles". The seller is "vintagetobacco" and is located in this country: US. This item can be shipped to United States.